There is a lake in the middle of North Island of New Zealand, surrounded by volcanoes, bordered by alpine desert, touched by waterfalls and geothermal activity, and for one weekend in the winter of 2017, was infiltrated by creatives, artists, fen, and the odd taniwha-wannabe. Taupo: we came, we celebrated, we shared our brains. But...not in a zombie way. Well, maybe some did. I dunno. I don't ask.

Guest of Honour Seanan McGuire expressed a desire to leap into Lake Taupo and become a ruling scaled beast of the depths (eating tourists only for the first two years of her contract with the locals). Paul Mannering recruited willing participants to tread fun and familiar territory through another radio play "Word of the Things", where The Great Orange One Lord Sour-Ron was attempting to build a wall around More-Doors and get the other races to pay for it, and the ship of  Scamwise and Toedoh finally sailed using Snuggle as an anchor. The con was also subtitled (to those in the know) "OrvilleCon" as the Ghost of Honour was the famous rat Orville who co-starred in the Hobbit movies - may he find all the cheese he needs in ratty heaven.

So yes, Lexicon had a very distinct New Zealand flavour (tastes like Kakapo) and humour, spiced with a good dollop of Seanan fun (snakes, frogs, and sunset hair, oh my). We welcomed guests from Australia, Sweden, and the US in the form of DUFF visitor Paul Weimer.

The Suncourt Hotel convention rooms buzzed like a swarm of well fed sand flies in summer. Pieces of brain were shared (in the form of knowledge, OF COURSE). Laughter spread like Marmite on toast.

And I had a damn good time. Because this happened: 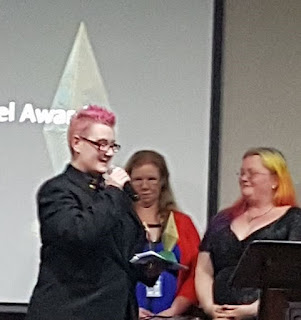 *record scratch* Yup. That's me up there next to Seanan and Lynelle. Bet you're wondering how I got there.

I won the Sir Julius Vogel Award for Best Short Story, for "Splintr" from At The Edge. I may have spoken coherently (I think?), but I was pretty glazed for quite some time. I know it sounds trite, but I really wasn't expecting it. It still hasn't sunk in properly. Thanks all you lovely people. It was the perfect cap to a great weekend.

Keeping the winning-ness going, I also took 2nd place in the Lexicon Short Story competition, which meant I went home with more books than I arrived with! Lesbian pirate capybara and soprano marmot FTW!

A big first for me at Lexicon was moderating panels. Determination: go prepared! Actuality: I did! Diverse Families in SFF went well, and I could have done with another hour or two to dig deeper into the topic. In Need of Superheroes was fun, coz we got to squee about the diversity shining through in modern comics and bitch out Nazi Captain America (BOOOOOOO).

The panel I had the most fun moderating and the juicy discussion that came out of it was Future of a Spacewoman. Ground Rule Laid: This Ain't Yer Mom's 101. People dubbed it "Feminism in Spaaaaaaace!" and we came out of it quite buzzy. We talked about PERIODS. And demanded trans women and non-binary people be in our Science Fiction Double Feature. And said Ain't No Space Party Without a Reproductive Justice Party So Get Your Today Right As The Women of Tomorrow Are Gonna Lead The Charge And Leave You Behind. And I got to fangirl over The Expanse. I plan to blog about it, interest was so high.

Outside picking up a pointy statue designed by Weta and chewy panel goodness, I attended lots of cool discussions, including Seanan McGuire's beautiful GoH speech about kindness in our communities and writer up lift. Hell yeahs. I also really enjoyed the Ecosystems in SFF panel with Meryl Stenhouse, Octavia Cade, and Seanan McGuire - lots of chewy bugs, er, food for creative thought. And speaking of Octavia Cade, I'm super proud she won TWO SJVs, for Best Novella and Best Fan Writing.

In the best tradition of People Who Haven't Seen Each Other For A Long Time or Ever, discussions and cups of tea and Glasses of Fanta were much enjoyed in the liminal places of the con. Magical words were passed between myself and Seanan and myself and Kaaron Warren, which will remain our private spells.

The Lexicon concom did a great job putting together events and a program, and the weekend went incredibly smooth. Thanks team!

I'm sure I'm forgetting lots in the post-con haze, but overall I'm coming out of it feeling great and a good time was had by the many. The volcano demons were satiated without the sacrifice of virgins, taniwha-ness was flirted with, old friends refilled their life-blood, and new friends were shaped from the clay of the ether.